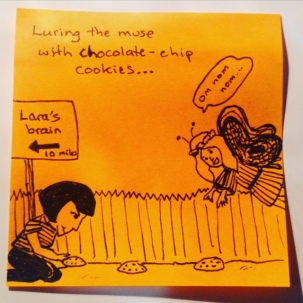 Recently, I met up with an old friend from high school, whom I hadn’t seen in nine years. Chatting over crepes, we caught up on all the expected subjects, from family to mutual friends, before the topic shifted to writing. My friend, it turns out, is a monstrously productive writer. Since I last saw her, she’d written five or six different books in a fantasy series of her own creation. She told me this with such frank and modest candor that I had to wonder whether she might secretly hail from another planet, populated by elevated beings who are eons more evolved than we are. I still have my suspicions. To make a long story short, she inspired me to exhume draft one of my novel from the cavernous depths of my laptop, and begin the journey towards draft two.

You’d think second drafts would be easier. You’d think the hard part would be out of the way. Nope. The truth is, second drafts are pain in the asparagus. Intellectually, I knew this already, because I’d been told. By my writer peers, and by celebrated published authors who have lectured on the process, both at Oxford and Edinburgh. I accepted that these people were certainly right, that they knew what they were talking about. But actually experiencing the process for myself is a whole other can of haggis.

Much like Alcoholics Anonymous, the first step in writing a second draft is admitting you have a problem. Which isn’t to say my first draft is necessarily a horrible steaming word-turd, of course. First drafts are meant to be imperfect. I, for one, really love (most of) my first draft, yet I still have a notebook full of drastic changes I need to inflict upon it, so it can be that much better. It’s going to treacherous, but ultimately worth it. Like having to perform open-heart surgery on your favorite uncle. It’s stressful and horribly personal, but what can you do? You can’t just let him die!

The first issue I’m tackling involves one of my main characters. She needs to be more sympathetic, a little more conflicted, a little less angry. The trouble is, most of the comedy in her sections result from her angry internal monologue. And it kills me to cut the funny bits! Still, every writer knows you must “kill your darlings”, so all I can do is suck it up and press delete, because although audiences love a good laugh, comedy is quickly forgotten, without a poignant glimmer of truth to cling to. I won’t lie though, I do keep my rejected funny passages in a separate “discard” folder. Just in case.

I’m still trying to devise a system, in order to better organize my re-writing process. Because of the way my novel is structured, it doesn’t make sense to do it all chronologically. In draft one, it was easy. I’d tell myself I had to do between one thousand and two thousand new words a day, and that was that. That won’t cut it anymore. I’ve got to know what issue I’m tackling, which parts are staying, which parts are being slashed or rewritten. My word count is basically irrelevant now.

All I can do is be persistent, and put aside time to regularly work on it. Time to recapture the muse, and tell her sternly, You’re not retired yet, Sweetheart, we have work to do yet.